Amateur Dota 2 League
For those of us not as good as Lemon Snow Cones. 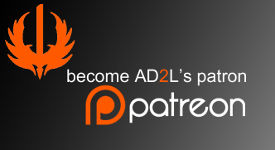 Hover over a match to view time information, you can also click on a match to go to the page for that match. Always trust the individual match pages as the final source of information, the brackets may ocasionally be drawn wrong

Games are Best of 3

Each player must have a solo and party MMR lower than 3000.  If you are a new player, it's okay to not be calibrated.  If you are a "new" player and you are crushing it, we will assume you are over the MMR cap and move you to our heroic division.  Failure to meet these requirements will be met with forfeits until the issue is resolved or removal from the current season if the requirements are not met 2 weeks after the season starts. Your Solo and Party MMR must be visible on your Dota Profile to enforce the MMR caps for the Entry and Heroic divisions. If you cannot comply to the mandatory rules for some reason, please contact us at ad2l-admins@googlegroups.com.

We’ve also empowered captains to report scores, it is your job to ensure your teams scores are accurate. Please report each match by editing the score on the match page after your game. If you have an issue you feel the admins need to get involved with, please collect evidence and email ad2l-admins@googlegroups.com, we will only be assisting with requests sent via that account. No player over 3000 MMR (Solo or Party) is allowed.  Your Solo and Party MMR must be visible on your Dota profile to enforce the MMR caps for the Entry and Heroic divisions.  Some minor leniency will be granted as the season progresses since MMR may slightly change after the season begins.

Any MMR reports (players that don't have MMR shown or suspected smurf accounts) must be sent BEFORE the game is played.  We will then investigate after and award forfeits as our findings and judgment are concluded.  This is to prevent the salty loss reports.  If you suspect a player is over the MMR ceiling, send an email BEFORE the game starts.